Pope Francis says that atheists are redeemed. Did you hear about that? Apparently it’s okay to be an atheist now, because we still get to go to heaven as long as we’re good people.

It’s actually kind of decent of him to say as much. It’s a good message to the devout, and I’m glad he’s telling them that we (atheists) are not, you know, baby-eating monsters and stuff. To the faithful, who listen to him and not to me, it probably sounds like a revelation.

But how does it sound to an atheist? Well... 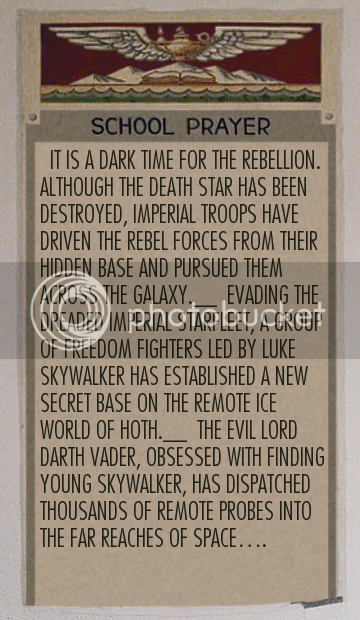 Posted by Dr Rotwang at 4:21 PM No comments:

Hey, everybody!  Long time, I know.  I've been busy getting ready for this year's War On Christmas.  'Cause, you know, who am I to make a liar out of Bill O'Reilly?

Most of my preparations have been in the design and commissioning of cutting-edge weapons and materiel for our troops to use in our ongoing crusade against The Baby Jesus, The American Way and "It's A Wonderful Life" (see Atheist War Memo 9-78: Operation Bedford Falling).  We atheists take our War On Christmas all seriously and stuff, so obviously these preparations were made carefully, conscientiously and with great anti-religious vitriol.

So!  What are we using to destroy happiness this year?  Well, let's start with--

This Is How Much I Hate Religion

In the context of a conversation about who-knows-what, a friend of mine remarked that I, as an atheist, hate religion.

This makes sense, right?  I mean, saying that an atheist hates religion is like saying that day follows night or that Jenny's phone number is 867-5309.  It's science!  Right?  Right?  RIGHT?!

Ha!  No, no, you're not reading I Waste The Buddha With My Crossbow (although you should, because it is the greatest blogging achievement in the field of table-top adventure gaming, 80's pop culture references and stupid jokes about "dowser-trousers").

No, my homies, I just ran across this article, see -- "Killing The Buddha", by Sam Harris.  In his piece, Harris argues that worship of the Buddha as a religious figure is actually to Buddhism's detriment.

I agree with him.

Being an atheist does not mean being closed-minded.  It means not being convinced of the existence of a supernatural power that is to be worshiped.  Atheists are skeptics, they have a naturalistic world view and prefer free thought without dogmatic principles.

That's why I'm totally in Sam's corner when he says,

"[T]he continued identification of Buddhists with Buddhism lends tacit support to the religious differences in our world. At this point in history, this is both morally and intellectually indefensible—especially among affluent, well-educated Westerners who bear the greatest responsibility for the spread of ideas. It does not seem much of an exaggeration to say that if you are reading this article, you are in a better position to influence the course of history than almost any person in history. Given the degree to which religion still inspires human conflict, and impedes genuine inquiry, I believe that merely being a self-described “Buddhist” is to be complicit in the world’s violence and ignorance to an unacceptable degree."

Later on he compares Buddhism to science, and goes on to point out that, if freed from its religious framing, Buddhism could be a very positive force for good.

I've been thinking that for years, myself.

My home town is the location of the Tibetan Mongolian Buddhist Cultural Center.  It's not uncommon to see the monks shopping for shoes at the mall, or walking together downtown.  They always seem to be in such a good mood.  I've long thought that, based on what little I've known about Buddhism, these guys would really rock if they dropped the Woo, maybe stopped denying themselves so many of life's simple pleasures and just focused on saying, "Dude, ease up.  Take a minute or two to relax and think about how weird Life is, and make your peace with it."

Plus, maybe then they could teach me to relax.  It'd be an epic achievement, though, so they'll have to work in teams.

Looser Morals Than A Disassembled Stripper

As we all know, being godless means that you lack any kind of moral center.  With no divine guidance in matters of right and wrong, you cannot possibly know the difference, no matter how much you insist that you do.  Ergo, the godless are a bunch of violent, corrupt, immoral outlaws, getting away with whatever they can, raising hell and making Juggalos pale with terror.

Hi.  I'm Doc Rotwang!.  You might remember me from such industrial education films as They Call Him Dr Rotwang!, Dr Rotwang! Is His Name and Stay Out Of the Cardboard Smasher. Or perhaps you have read my other blog, I Waste The Buddha With My Crossbow (which is actually about table-top role-playing games, my 1980's pop culture fixation, New Wave music and whatever absurdity I'm in the mood for -- but I digress).  Or maybe you don't know me from a jumbo jar of pickles at Wal-Mart.  That's OK, too.  It'll keep things interesting!

AaaaAAAAaaaAAAAny-old-way, I'm the dirty damn filthy damn atheist of this blog's title.  My other blog wasn't really the place for some of the stuff I want to say, so I started this one on the side.

So!  Let's get to know me, shall we?  We can do that via my favorite method of self-introduction -- THE FAKE QUESTION-AND-ANSWER SESSION!